In this inventive, fast-paced novel, New York Times bestselling and Printz Award-winning author Paolo Bacigalupi takes on hard-hitting themes–from food safety to racism and immigration–and creates a zany, grand-slam adventure that will get kids thinking about where their food comes from.The zombie apocalypse begins on the day Rabi, Miguel, and Joe are practicing baseball near their town’s local meatpacking plant and nearly get knocked out by a really big stink. Little do they know the plant’s toxic cattle feed is turning cows into flesh-craving monsters! The boys decide to launch a stealth investigation into the plant’s dangerous practices, unknowingly discovering a greedy corporation’s plot to look the other way as tainted meat is sold to thousands all over the country. With no grownups left they can trust, Rabi and his friends will have to grab their bats to protect themselves (and a few of their enemies) if they want to stay alive…and maybe even save the world. 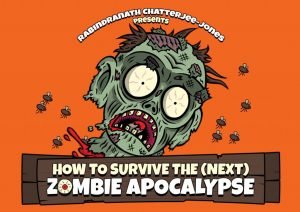 Printz-winner Bacigalupi (Ship Breaker) defies the expectations of the comedy-horror genre, turning this zombie novel into an effective bit of social commentary while staying true to the story’s grisly and goofy roots. In a small town dominated by Milrow Meat Solutions, Rabi Chatterjee-Jones is a normal kid, mostly concerned with not making a fool of himself playing baseball, and spending time with his friends Miguel and Joe. Shortly after Miguel’s family—illegal immigrants, like many who work in the meatpacking industry—is deported, the boys run into a zombie and start to suspect that there’s more than meets the eye at the plant. There are some familiar zombie-tale elements (yes, the zombies shout for “brains,” and, no, the police don’t believe the boys), but their biggest nemeses are corporate lawyers and plant managers. Bacigalupi rails against factory farming, the abuse of illegal immigrants, and ag-gag laws, but never lets the humorous elements fall by the wayside. Casual readers will have a blast, and those who look deeper will learn something, too. Ages 8–12. Agent: Martha Millard, Martha Millard Literary Agency. (Sept.) — Publishers Weekly

Printz-winning Bacigalupi writing a middle-grade zombie novel? Yes, it really happened, and yes, it’s pretty darn good….Simultaneously smart, funny, and icky, this book asks a tough question: Is it worth looking the other way in order to save yourself? — Booklist

Gr 5–9—Don’t be misled by this novel’s horror B-movie title and cover art: thought-provoking, topical issues and wry wit elevate it above the expected gross-out zombie tale. Middle school friends Rabi, Miguel, and Joe literally smell trouble wafting from their small town’s meatpacking plant, where they find cows living in filthy conditions and behaving oddly. Then the boys’ baseball coach turns up moaning “Brainsssss!” and tries to bite Rabi. When the children discover that meat from the sick cows is being packaged and sent to local supermarkets, they are on their own to prevent a zombie cow apocalypse because no one believes their story. Miguel’s revelation that he’s in the country illegally introduces biting commentary on racism and immigration. Bacigalupi also zings big business, the meatpacking industry, and the USDA, culminating in an epilogue that’s both cautionary and empowering. Rabi, Miguel, and Joe are realistic, complete characters. It’s a testament to the author’s skill that they express values of courage, friendship, and integrity as naturally as they toss off hilarious observations: “Talk about ankle biters,” Rabi comments when he sees two little zombie girls chewing on a man’s leg. References to current video games and cyberpunk comics add appeal to this fast-paced home run. — School Library Journal – Marybeth Kozikowski, Sachem Public Library, Holbrook, NY

Upton Sinclair’s The Jungle meets Left for Dead/The Walking Dead/Shaun of the Dead in a high-energy, high-humor look at the zombie apocalypse, complete with baseball (rather than cricket) bats. The wholesome-seeming Iowa cornfields are a perfect setting for the emergence of ghastly anomalies: flesh-eating cows and baseball-coach zombies. The narrator hero, Rabi (for Rabindranath), and his youth baseball teammates and friends, Miguel and Joe, discover by chance that all is not well with their small town’s principal industry: the Milrow corporation’s giant feedlot and meat-production and -packing facility. The ponds of cow poo and crammed quarters for the animals are described in gaggingly smelly detail, and the bone-breaking, bloody, flesh-smashing encounters with the zombies have a high gross-out factor. The zombie cows and zombie humans who emerge from the muck are apparently a product of the food supply gone cuckoo in service of big-money profits with little concern for the end result. It’s up to Rabi and his pals to try to prove what’s going on–and to survive the corporation’s efforts to silence them. Much as Bacigalupi’s Ship Breaker (2010) was a clarion call to action against climate change, here’s a signal alert to young teens to think about what they eat, while the considerable appeal of the characters and plot defies any preachiness. Not for the faint of heart or stomach (or maybe of any parts) but sure to be appreciated by middle school zombie cognoscenti. (Fiction. 11-14) — Kirkus Reviews