In America’s Gulf Coast region, where grounded oil tankers are being broken down for parts, Nailer, a teenage boy, works the light crew, scavenging for copper wiring just to make quota — and hopefully live to see another day. But when, by luck or chance, he discovers an exquisite clipper ship beached during a recent hurricane, Nailer faces the most important decision of his life: Strip the ship for all it’s worth or rescue its lone survivor, a beautiful and wealthy girl who could lead him to a better life….

Bacigalupi’s future earth is brilliantly imagined and its genesis anchored in contemporary issues…The characters are layered and complex, and their almost unthinkable actions and choices seem totally credible. Vivid, brutal, and thematically rich, this captivating title is sure to win teen fans for the award-winning Bacigalupi. — Booklist (Starred Review)

Bacigalupi (The Windup Girl) makes a stellar YA debut with this futuristic tale of class imbalance on the Gulf Coast…Bacigalupi’s cast is ethnically and morally diverse, and the book’s message never overshadows the storytelling, action-packed pacing, or intricate world-building. — Publisher’s Weekly (Starred Review)

This thriller will grab and keep readers’ attentions as Nailer and Nita ‘crew up’ in their fight to survive. — The Horn Book (Starred Review)

…this gritty, tautly paced novel will rivet readers eager to learn both the fate of the young ship breaker and the reason for the world’s grim collapse. Memorable characters add pith and spirit… — The Washington Post

Nailer, a teenager living in the American gulf coast in the distant future, has a dangerous, low-paying job as a ship breaker. Small and nimble, he puts his life on the line daily while scavenging ships for copper wiring from oil tankers to fuel corporate greed, while Nailer and his gang struggle to afford food, shelter, and clothing, not to mention sufficient protective work gear. Nailer’s home life is bleak: his mother is dead and his father is addicted to crystal slide and abusing his son. When Nailer and his friend Pima discover an abandoned ship filled with valuables, it seems they have found an escape route. But Nailer’s conscience gets in the way when he realizes that the ship’s owner, a beautiful teenage girl, is still alive and needs his help. In his first book for young adults, Bacigalupi, an award-winning novelist, has created a dystopia where loyalty, integrity, and warmth seem to be slipping away, but class consciousness is still prevalent. From the very beginning, there is trouble, warning readers to hold on because scene after scene will be filled with adventure, fighting, murder, and desperation. Librarians should definitely add this book to science fiction collections. Teens will not be disappointed. — VOYA – KaaVonia Hinton-Johnson

When fate intertwines with desperation and luck, the outcome can be both a curse and a blessing. In an advanced world, where huge cities have been sunken to the depths of the oceans, humanity thrives on luck and self preservation. In this twisted new world, Nailer has suffered tremendously since the death of his mother, watching his father become a dangerous, reckless alcoholic. Faced with no other choice but to follow in the footsteps of the one man with the strength to kill him, Nailer dedicates his survival to breaking down and stripping rotting oil tankers. Constantly overwhelmed by making quota, Nailer crawls into the deepest bowels of the decrepit ships to scavenge for wire for ungrateful bosses. Fate carries him through a near-death experience thwarted by a coworker, but refuses to leave his side as he narrowly escapes his menacing father and a massive hurricane that hits the Gulf Coast. Upon searching the beach after the destruction of the hurricane, Nailer finds a washed-up clipper ship full of enough silver to seriously change his luck for good. However, the ship holds one survivor, a lone girl who claims to be the heiress to a major shipping company. Desperate to forgo the life his father has doomed him for, he resolves to save the girl and help her find her father’s alliances up the coast. The sincere hope for a better life fuels his dedication to help the heiress, despite the incessant bad luck that follows him at every turn. — Children’s Literature – Patrice Russo Belotte

Gr 7 Up—Along a devastated U.S. Gulf Coast in a sci-fi future that includes half dog/half man creatures, teen boy Nailer must work as a ship breaker salvaging anything valuable on dangerous oil tanker wrecks. Other risks include an abusive, drug-crazed father, unemployment when he grows bigger, and flimsy shelter from ferocious storms. After one hurricane’s onslaught, he and friend Pima discover Nita Patel, a rich girl almost drowned in her futuristic clipper ship. When his father threatens the girl and wants to ransom her or accept money to turn her over to her father’s enemies, Nailer and Nita escape by hopping a train accompanied by Tool, an unusually independent dog/man. The three go to Orleans (no longer called New), a broken down relic of a city, and hope that a trustworthy captain from the Patel Company will show up. When Nailer’s dad kidnaps Nita, the boy faces a final showdown with his father to free her. Joshua Swanson narrates Paolo Bacigalupi’s fast-paced novel (Little, Brown, 2010), winner of the 2011 Michael L. Printz Award for excellence in literature written for young adults, with steady, dramatic intensity and enlivens characters with admirable vocal variety. The action and adventures are exciting, but occasionally quite bloody. Even more distressing are the harsh conditions faced by these youthful salvagers, much like contemporary third-world children. With an interesting mix of fact and fantasy, this title offers excellent potential for conversations on international child welfare issues — School Library Journal – Barbara Wysocki, Cora J. Belden Library, Rocky Hill, CT

A gritty teen betrays his father and flees his grim existence in a post-global-warming Gulf Coast village to protect a young woman he barely knows in this gripping futuristic thriller. Fifteen-year-old Nailer works on the “light crew” as a ship breaker, salvaging metals from abandoned oil tankers. Nailer’s vicious father routinely beats him. In this violent world where people do anything for money, Nailer’s future seems bleak until he discovers Nina, the wealthy, attractive survivor of a shipwreck. Rather than kill Nina and steal the salvage, Nailer opts to save her, triggering a harrowing journey to the submerged cities of Orleans to find people loyal to Nina. As Nailer experiences brutal betrayals, he relies on his wits and learns the people worth calling family are the ones who “[cover] your back…. Everything else [is] just so much smoke and lies.” In Bacigalupi’s defiled, depressing landscape populated by mercenary humans and mechanical dog-men, Nailer’s loyalty offers hope. Told in the third person, this stark, surreal story sends an alarm to heed the warning signs of climate change or suffer a similar fate. — Kirkus Reviews 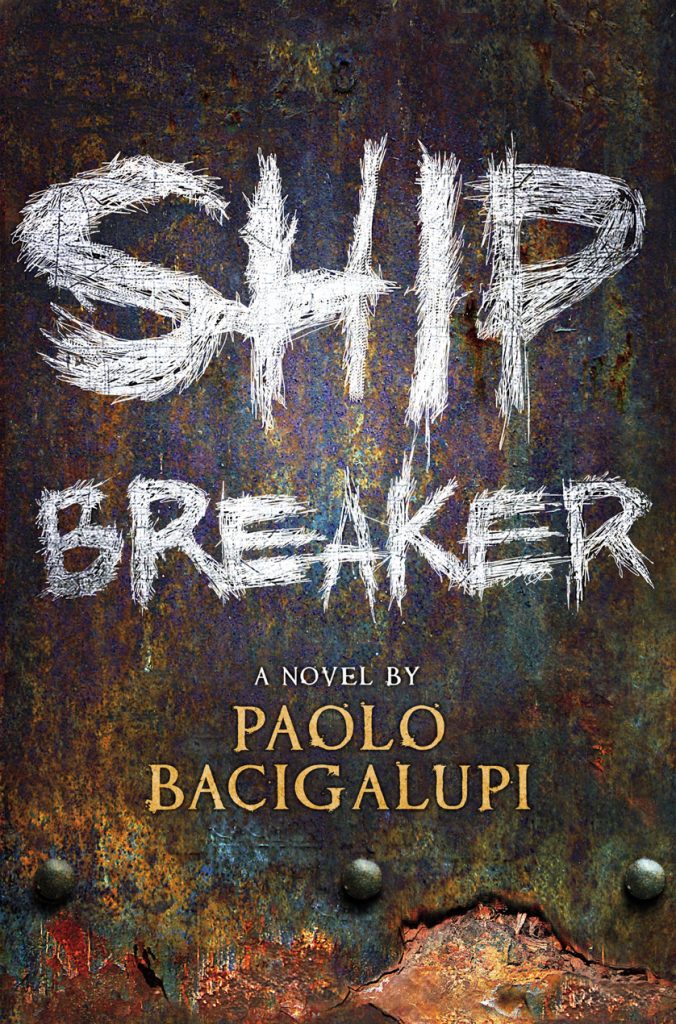 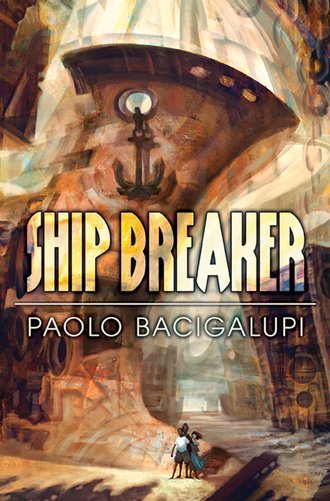 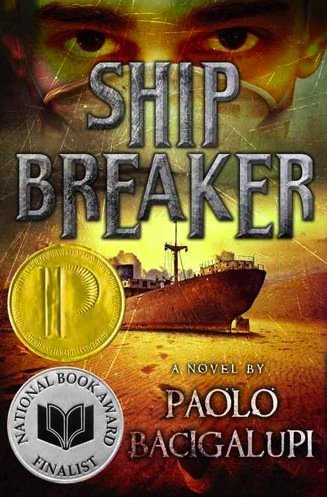 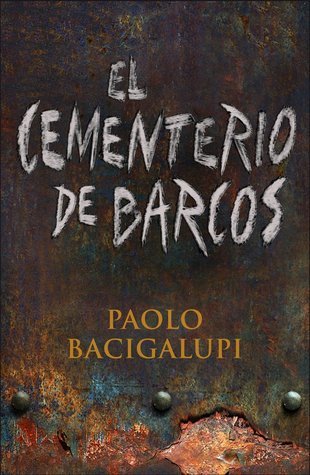 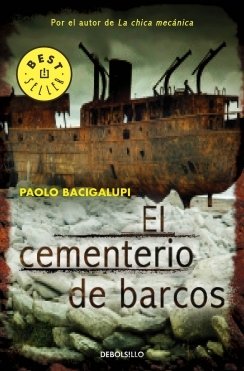 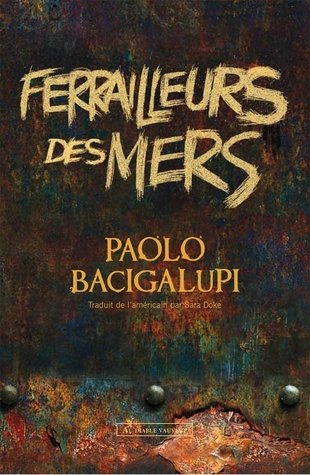 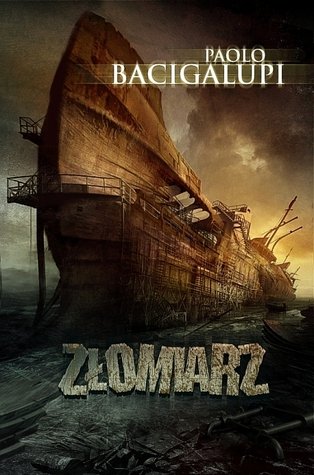 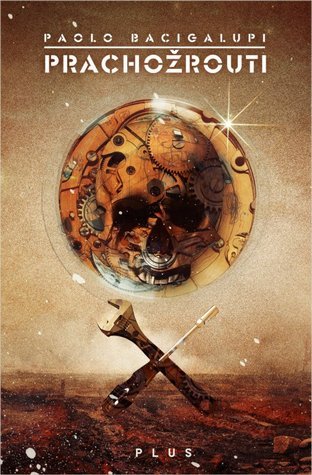 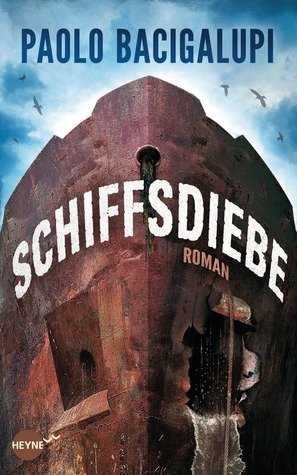 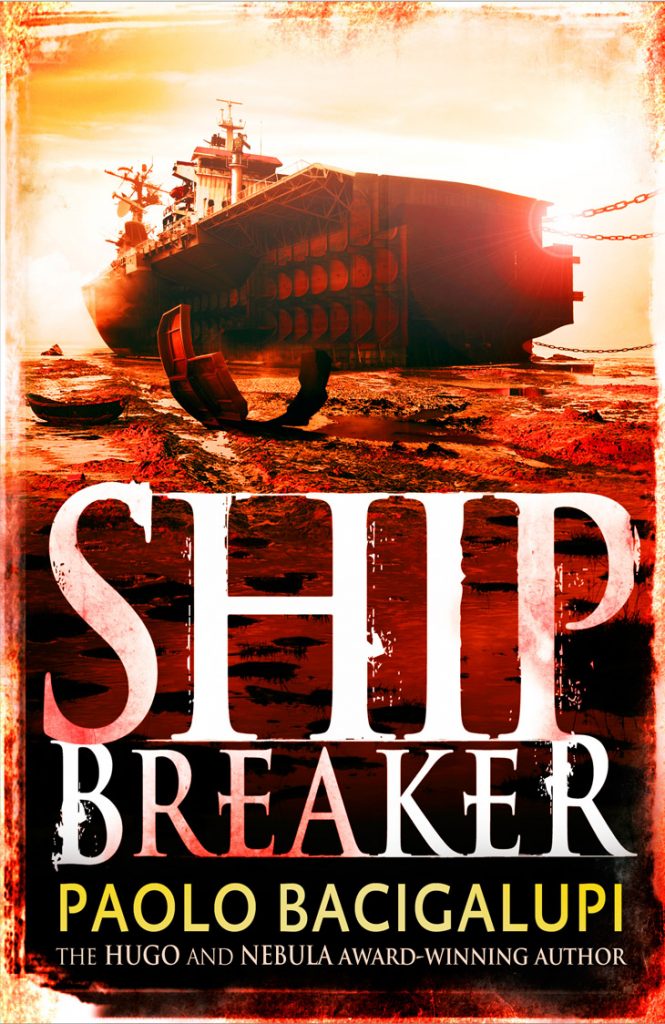