Soldier boys emerged from the darkness. Guns gleamed dully. Bullet bandoliers and scars draped their bare chests. Ugly brands scored their faces. She knew why these soldier boys had come. She knew what they sought, and she knew, too, that if they found it, her best friend would surely die.

In a dark future America where violence, terror, and grief touch everyone, young refugees Mahlia and Mouse have managed to leave behind the war-torn lands of the Drowned Cities by escaping into the jungle outskirts. But when they discover a wounded half-man—a bioengineered war beast named Tool—who is being hunted by a vengeful band of soldiers, their fragile existence quickly collapses. One is taken prisoner by merciless soldier boys, and the other is faced with an impossible decision: Risk everything to save a friend, or flee to a place where freedom might finally be possible.

This thrilling companion to Paolo Bacigalupi’s highly acclaimed Ship Breaker is a haunting and powerful story of loyalty, survival, and heart-pounding adventure.

Bacigalupi’s earlier young-adult novel in this universe, Ship Breaker, won one of the two most prestigious awards for a YA book—the Printz—and was nominated for another, the National Book Award. Naturally, expectations for a sequel or spinoff involve diminishing returns, butDrowned Cities is better in almost every way. — The Onion AV Club

Bacigalupi writes with a furious energy that makes this brilliant depiction of an all-too-believable future impossible to forget. A story that will resonate beyond its final page. — Booklist (Starred Review)

Bacigalupi’s intense, action-filled novel is a heartbreaking and powerfully moving portrait of individual resiliency amidst extreme circumstances that rivals, if not surpasses, the excellence of its predecessor. — The Horn Book (Starred Review)

Suzanne Collins may have put dystopian literature on the YA map with ‘The Hunger Games’… but Bacigalupi is one of the genre’s masters, employing inventively terrifying details in equally imaginative story lines. — Los Angeles Times

A new Paolo Bacigalupi novel is reason to celebrate—no matter how old you are. — The Associated Press

A heartbreaking tale of loyalty and the fight to survive. — Library Media Connection

Mahlia and Mouse are war maggots—refugees who have made it out of the war-torn Drowned Cities. Living now in a small village with the local doctor, Mahlia and Mouse decide to venture into the woods to hunt. While out, the two discover Tool, a bioengineered war beast who escaped capture and is being hunted by a band of soldiers. Through a strange turn of events, Mahlia ends up promising to save Tool’s life. However, when she returns to her home for medicine, it has been overrun with the soldiers hunting for Tool. Cleverly, Mahlia creates a distraction and manages to return to Tool, and against the doctor’s wishes, saves him. The doctor and Mouse return to the village and straight into the arms of the soldiers. Mahlia is left with a decision: return to her village to save her “family” or run for her life under Tool’s protection. Mahlia decides to save her family, and Tool decides to join her. Mahlia and Tool track the soldiers, following them through the woods and into the city. Mahlia struggles to blend in, especially with Tool tagging along. She is desperate though to save Mouse, and embarks on a dangerous adventure within the confines of the Drowned Cities. The strong female protagonist is a breath of fresh air. Loveable characters and constant action keeps the reader up all night to see what will happen next. A theme of the importance of friendship is woven throughout this well-written novel. — Maggie L. Schrock

Gr 9 Up—This is a companion book to the author’s Ship Breaker (Little, Brown, 2010). Tool, a ferocious bioengineered weapon of war that is part animal, part man, and built to kill, finds himself without a general and thinking for himself in this engrossing postapocalyptic novel. He begrudgingly becomes entwined in the lives of two orphan refugees, or war maggots, Mahlia and Mouse, and the pacifist Doctor Mahfouz, their guardian. Climate change has flooded the cities of America and made resources scarce. There is no centralized government, only factions fighting against one another for control of what is left. Chinese peacekeepers, including Mahlia’s father, have long since abandoned the country, leaving behind their children, the castoffs hated by all sides, to suffer unimaginable horrors. All the while, the people of the Drowned Cities try to go about life as quietly as possible, to escape the notice of whatever army is in charge. The United Patriot Front is fighting the Army of God for control of Banyan Town, with the Freedom Militia not far off. UPF soldiers have burned Banyan Town to take what they need from its people and leave them with nothing. What happens to civilians is of no consequence. War is everything. The bloody adventures of Tool, Mahlia, Mouse, and Doctor Mahfouz peel back the layers of war and expose its amoral underbelly, revealing that the armies fighting with such brutal callousness are made up entirely of children. A compelling read, this engaging book does not glorify war and violence, but shows its true nature. — Cindy Wall, Southington Library & Museum, CT

In the visceral and deeply affecting companion to the Printz Award–winning Ship Breaker, Bacigalupi returns to a dark, war-torn dystopian future in which severe climatic change and years of political upheaval have left the United States a bloodied and ravaged landscape. Bands of child soldiers roam from village to village, raping, pillaging and brutally murdering, all in the name of endless civil war. Against the backdrop of this blood-soaked chaos, two unlikely allies, a crippled teenage “war maggot” and a half-man/half-beast genetically altered killing machine, risk their lives and their freedom to save a boy forced into servitude by rebel soldiers. Mahlia and Tool (whom readers may recognize from Ship Breaker) venture deeper and deeper into the Drowned Cities, each fueled by unwavering loyalty. As they do, readers are given glimpses of proof that love and humanity can shine through even the most unimaginable darkness. Arguably, the novel’s greatest success lies in the creation of a world that is so real, the grit and decay of war and ruin will lay thick on the minds of readers long after the final page. The narrative, however, is equally well crafted. Told in the third person, the novel alternates between Mahalia and Tool’s stories, allowing both characters the time and space to imprint themselves on readers’ hearts. Breathtaking. (Dystopian. 14 & Up) — Kirkus Reviews

In this dark, riveting novel…Bacigalupi deftly shifts the third-person point of view amongst Mahlia, Tool, Mouse and Ocho, offering their different back stories and perspectives and bringing them together in a gut-clenching, heart-wrenching climax. — The Washington Post – Mary Quattlebaum

In the future, the water levels have risen enough to “drown” urban coastal areas of what was once the United States of America. China has come attempting to bring order to this lawless area. The Chinese bring with them genetically-engineered dog soldiers designed to fight to the death for their master. Tool is one such solider. When attempting to escape from warlords, he is gravely injured in a fight with a giant crocodile. Thinking he might be good food, war maggots, Mahlia and Mouse, come upon him. Tool attacks and takes Mouse hostage in exchange for Mahlia’s medical help. Mahlia goes back to the doctors with whom she is staying only to find out that they are now housing the soldiers who are looking for Tool. Since she is part Chinese, the soldiers look for a way to hurt Mahlia. In her diversion to escape with medicine to help Tool and save Mouse, many soldiers are wounded or killed causing them to retaliate and kill most of the village in which they were staying. Mouse attempts to save the doctor and is forced to enlist in the group. Mahlia feels awful for running and decides to take Tool and save Mouse. She must fight her way through the Drowned Cities with Tool to save Mouse from the war and himself. Bacigalupi brings to life a post-apocalyptic America that thrills the mind. Never would we imagine that China would have to save us from our own destruction. Just like Frankenstein’s monster, Tool is shown to be more human and civilized than any of the ruthless human characters in the story. — VOYA – Barbara Allen

In his award-winning YA novel Ship Breaker (2010), Paolo Bacigalupi imagined a post-oil world a century from now, drastically changed by the effects of global warming — a kind of upbeat dystopia in which human civilization survives despite massive upheaval and war. In this novel, he returns to the same milieu, though the story he follows here is more deeply shadowed. The Drowned Cities introduces the one- handed, half-Chinese “war maggot” Mahlia, who lives in Banyan Town along with Mouse, who once saved her life, and the humane Doctor Mahfouz, for whom she works. Together, they eke out a living amid the chaos of a fragmented former United States awash in battling militias and armies.

This fragile existence is compromised when Mahlia and Mouse encounter the man-beast named Tool, “a perfect creature, designed from the blood on up to hunt and war and kill.” The massive Tool is fleeing Colonel Glenn Stern’s United Patriot Front, which soon occupies Banyan Town looking for the living weapon. Gravely injured, Tool needs medicine and strikes an uneasy bargain with Mahlia; when Mouse is later conscripted by the UPF ? who operate with a savagery barely reined in by the vestiges of military discipline — Mahlia enlists the monster’s aid to help her rescue Mouse. Their quest takes them into the drowned cities, an area around the former city of Washington, D.C., where the chaos is even more horrific.

The second half of The Drowned Cities chronicles Mouse’s life among the soldiers of the UPF and Mahlia and Tool’s travel downriver in pursuit, with the ultimate goal of seeking safety in Manhattan Orleans or Seascape Boston. Of course, things don’t work out quite the way either of them envision, due to obstacles like the UPF’s nemesis, the Army of God. One of the most vivid scenes in The Drowned Cities depicts a battle between God Soldiers armed with powerful artillery and a unit of the UPF trying to cross the river. The clarity and tension of the sequence is utterly convincing, influenced more by classic combat literature than the extrapolated conflicts found in most science fiction.

Throughout the novel, Bacigalupi handles several elements with aplomb. Mahlia is a fully realized, compelling character, and the sheer physicality conveyed by Tool as super-beast often astonishes. The casual brutality of amateur soldiers is blood-curdling rather than cartoonish. The well-thought- out future setting fascinates, especially in showing the aftereffects of a failed Chinese peacekeeping mission.

However, the novel teeters perilously close to becoming “Apocalypse Now Lite” simply by compressing events into too tight a timeframe. Mouse’s conversion to brainwashed teen soldier and Mahlia’s trip downriver with Tool both seem curiously foreshortened, especially given the lengthy prior scenes (sometimes tedious) of Mahlia convincing Tool to help her. The inevitable final confrontation in a half-ruined palace bears an uncomfortable resemblance to the climax of a Hollywood blockbuster.

Still, even if it at times falls short of its ambitions, The Drowned Cities demonstrates a fearlessness on the part of the author. Every chapter from Tool’s point of view mesmerizes, crackling with a raw energy and verve, and the reader comes to care deeply for both Tool and Mahlia. And unlike many page-turners, the book’s violent action is paid for with a deep sense of the tragic, a vision of a possible future that leaves behind the marks of its impact. — The Barnes & Noble Review – Jeff VanderMeer 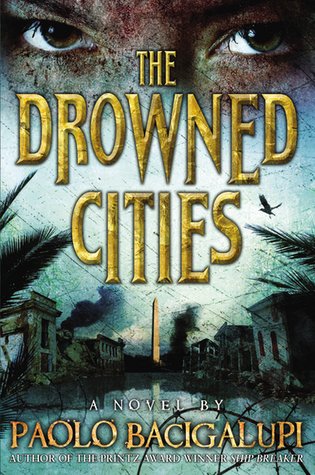 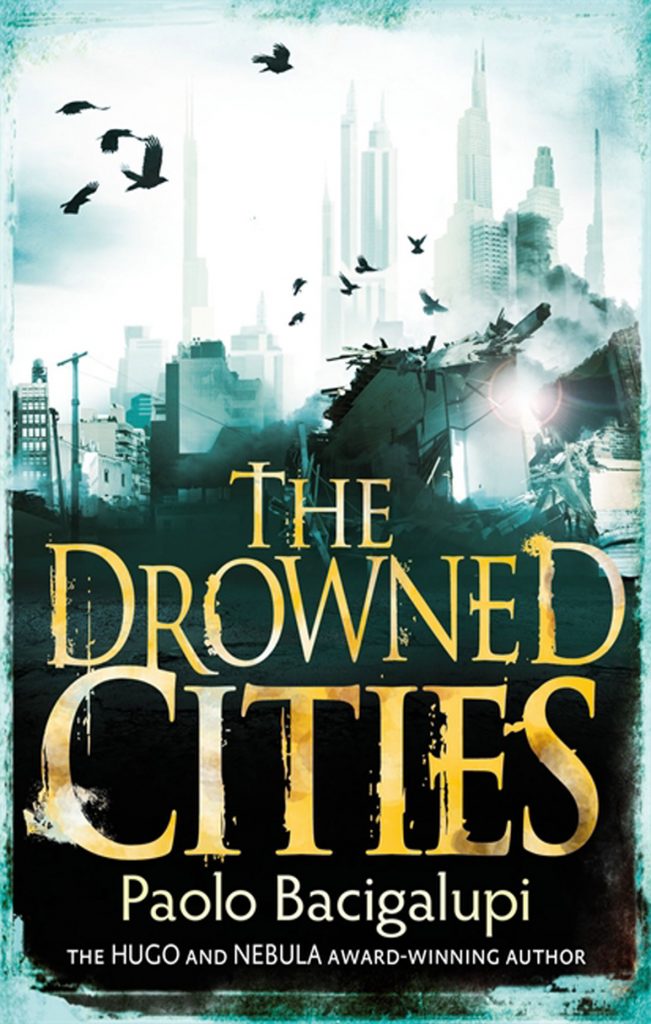 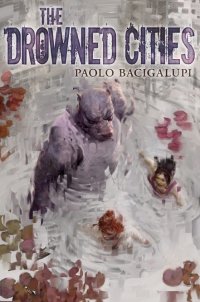 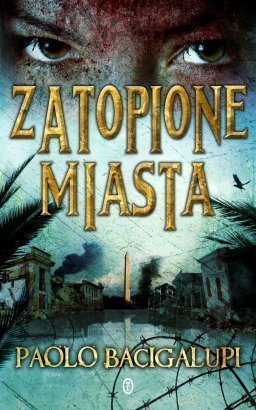