Some thoughts after the National Book Awards 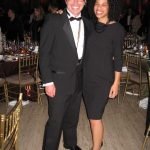 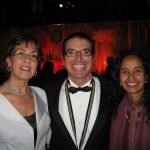 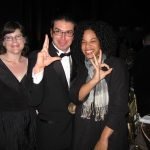 Above: Myself and Jennifer Hunt, my fabulous editor; My agent extraordinaire, Martha Millard, myself, and Anjula, the one who believed in me before anyone; and finally, Sara Zarr, NBA judge and previous finalist, along with myself and Jen, throwing the Little, Brown salute.

I had a ridiculously good time at the National Book Awards. Lots of readings and signings and fancy dinners and fabulous company. Alas, SHIP BREAKER did not win. But, you know, I’ve won a lot of awards this year, so I’m not complaining. When you’ve eaten as much cake with as much icing as I have, it’s hard to whine about not getting a third (or maybe fifth?) smearing. I’m fine with having been in the running. For real. I’m feeling just fine.

And that’s sort of an interesting feeling. As a science fiction writer, I’m delighted to have had a chance to represent the genre in an area of literature that doesn’t normally delight in stories of the future, but the National Book Award was never the award I grew up dreaming about. It was the Hugo. Always the Hugo. When fans chose THE WINDUP GIRL for the Hugo this year, that was the moment when I felt like my cup had more than run over. It felt like it was gushing and spilling and slopping all over the place. It was more than a little overwhelming, which also meant that even as I was feeling grateful, I was also feeling afraid.

“One hit wonder” has a certain terrifying ring to it.

So that’s what the NBA nomination did for me. It put me back on track. Gave me some perspective. It put some attention on SHIP BREAKER, a book that I have always been very proud of, but also felt like was being overshadowed by THE WINDUP GIRL’s phenomenal run. Now SHIP BREAKER has some bragging rights, too, and I’m glad. Not just for the book, but also because it reassured me that people seem to like it when I explore ideas that are interesting to me, and that’s cool, because I’ve got a few more ideas I’d like to explore. So I’m grateful for the reminder of why I write, and what pleases me about science fiction, and grateful to be back on track again, writing.

Which brings me to something I’ve been meaning to say for a long time. It started with the Nebula Award, and kept rolling along, getting bigger and bigger all through this year, to the point where it seems too small to say it, because it doesn’t represent enough of what I feel, but…

Thank you to readers and fans, for reading my stories and for passing them along and for voting for them. For seeing something in them that I sometimes can’t see myself. Thank you to all the booksellers who read the books and evangelized on their behalf. To the librarians who stocked the books and the reviewers who saw them first. I owe my editors Juliet Ulman and Jennifer Hunt, who made my books so much better than they were initially, and made sure that they got out into the world and got attention. And I owe my acquiring editor Joe Monti, now an agent extraordinaire, for seeing SHIP BREAKER sitting on Jen’s desk, stealing it, and then advocating for it with all his passion. I owe Night Shade for taking risks, and Little, Brown, for taking on a book that wasn’t automatically a seller, but had potential, and for taking the long view with it.

The list goes on and on, because even though I did a lot of work to write the books and get them out, I’m awed by the number of people who have helped me along the way. Authors like Robert J. Sawyer, who advised me and shared his expertise and experience. Writers like Tobias Buckell who gave me the idea for the SHIP BREAKER’s clipper ships. Writers like Sarah Prineas, who guided me when I wanted to tell a story for young adults, and shepharded me past more than a few pitfalls. I owe editors like Lou Anders, who didn’t just buy my short stories, but also went out of his way to find me an agent. I owe Gordon Van Gelder, who bought my first story “Pocketful of Dharma” years ago, and then reminded me that science fiction might be my best bet when he queried me a couple years later to see if I was working on anything new and because of that, I wrote “The Fluted Girl,” and then I owe him again because he introduced me to Lou Anders, and Juliet Ulman, years before I knew how big a role both of them would play in my life. Gordon also introduced me to Charles Coleman Finlay, aka C.C. Finlay, who started the Blue Heaven workshop, and who then invited me to join that group of professional dreamers, which then helped me figure out why my first draft of THE WINDUP GIRL was so incredibly broken.

I did the work of writing, but damn, there are a lot of people who stood along the road, and helped me. I can’t name them all, because it seems like they’re all around. People like Daniel Abraham, who took me in at my first convention, and asked me “What do you want to get out of your writing?” It took me two more years to figure that out and actually do something about it, but when it did, the light bulb glowed bright. Authors like Maureen McHugh who pushed me to work on the book that was big and scary, instead of the one that was easy and available. People like Bill Tuffin who combed over The Windup Girl for errors and invited me into his life on the far side of the world. People like Matt and Wang Fang Roberts, who, fifteen years ago in Beijing, let me sleep on their couch for far too long, when I was trying to figure out how to be an author and an adult and was failing at both, but who called me an author, anyway, and helped prod me into following through on my dream. Again and again, I see this pattern. At each stage of my writing career, I went a little further down the road, and then someone else showed up and helped me walk a little further.

I’m so grateful. Thank you, everyone.